Seven Warning Signs Your Roof Needs to Be Replaced

Replacing an old roof could be rather expensive. You wouldn’t want to replace a roof that’s perfectly fine, and neither would you want to wait too long till the roof is in deplorable condition. So, here are a few signs which indicate that your roof has neared the end of its lifespan.

If you notice any of the signs we discuss below, then it’s probably time to find a roofing company near you to replace or at least repair your roof.

How old is your roof?

Different roofing materials have different lifespans. For instance, asphalt shingles may last between 20-25 years, while metal roofs can last between 40-50 years. When you go to Florida and California, the popularly used copper, tile, and slate roofs can last as long as 100 years!

If your roof is nearing the end of its lifespan, then you would need to replace it regardless of how good it still looks. The thing is such a roof might look good from the ground, but its structural integrity has been compromised by age. Have any of your neighbours been replacing their roofs recently? If the houses were built around the same time, then you too might need to replace your roof.

While curling shingles might not be much cause for alarm, especially in the early stages, cracked shingles indicate a more severe roof problem. Shingles crack and bubble as a result of wind action and ordinary wear. If you only have a few cracked pieces, then you can replace those, but if the problem is rampant, you would need to replace the entire roof.

The same applies to missing shingles. Temporarily, you might get away with applying tar sealing on the blank spot where the missing shingle used to be. Just keep in mind that this will not work as a permanent fix. According to Austin roofing company Ace Roofing, the best time to check your roof for missing shingles would be after a heavy storm.

Do you often find that you dread the thought of rain because then you’d have to run around the house, covering some items with polythene sheets and strategically placing a cup in place to catch the leaking raindrops? A ceiling leak inside your home is one of the most obvious signs that a roof needs attention. Roofs leak when the flashing has developed breaks and cracks, which then allows rain to seep right through into your home.

Shingles tend or curl or buckle with time, and that’s all good because it’s part of the roof aging process, right?

If your shingles are buckling and lifting upwards, that is an indication that they are approaching the end of their life. Curling occurs when the asphalt base of the shingles id dried out, or when there is poor ventilation. It doesn’t necessarily have to occur at the very edges of the shingles, though. In some cases, you may find that the edges of the shingles lie flat, but the middle portion starts to come up. This shingles curling process is irreversible, so when it starts, you will eventually need to replace the roof.

Shingles have a shiny surface, and this is owing to the granules which give the shingles a protective covering. Roofs will lose shingles over time. However, if recently, there has been an increase in shingle granules in your gutters, then that’s a tell-tale sign that your roof will need replacing.

This is because while the loss of asphalt granules is a normal wearing process, the loss intensifies as the roof nears the end of its life cycle. Ideally, the granules will appear as back specks. Granule loss results in bald spots on the roof, and this compromises the integrity of the roof.

Sunlight in The Attic

Sunshine can feel amazing, especially in an attic. If the sunlight is coming in through your roof boards, though, then that’s not a good thing. Think of it like this: if sunlight can come through, then so can rain, snow, and cold air. So, if you can see sunlight from your attic, then that is a sure sign that your roof has a leak that requires attention. Once again, it would be possible to patch the leak if it’s small. If it’s large, though, it will make more economic sense to replace the roof.

It is not uncommon to find moss on roofs that don’t get much sunlight. Primarily the presence of moss is a cosmetic issue, but it can lead to more server roofing issues. 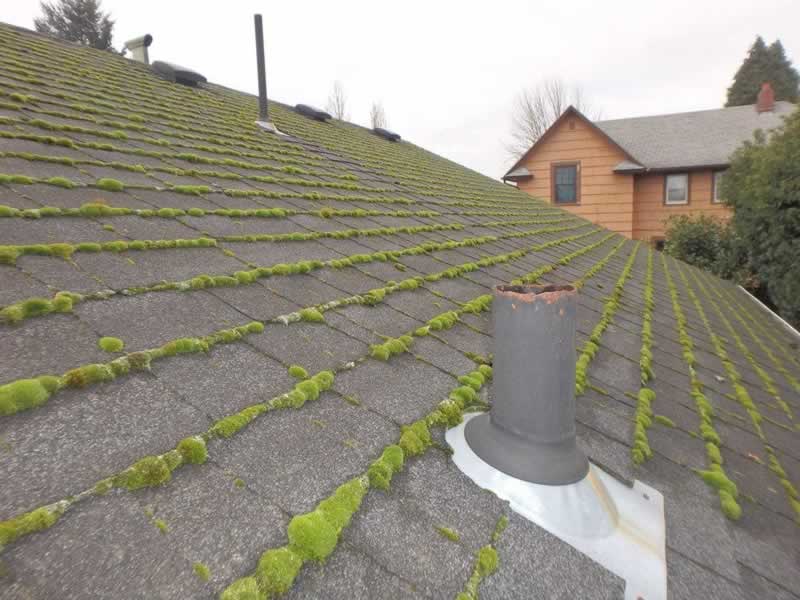 Moss tends to hold moisture close to the roof surface. When this happens in freezing climates, it can then damage the granules on asphalt shingles. Moss can be brushed away, but when doing so, it’s advised to hire a professional roofing contractor rather than taking matters into your own hands. Alternatively, you might also choose to replace the roof with a moss- and algae-resistant type of roofing tile.