How to Get Rid Of Wasps?

The buzz of a wasp flying by your ear is enough to send even those more composed of us into a fit of panic. Wasps are dangerous insects that somehow insist on invading our backyards every summertime. And unlike other critters, wasps are tricky to get rid of, since there’s a very real risk to your safety in doing that. 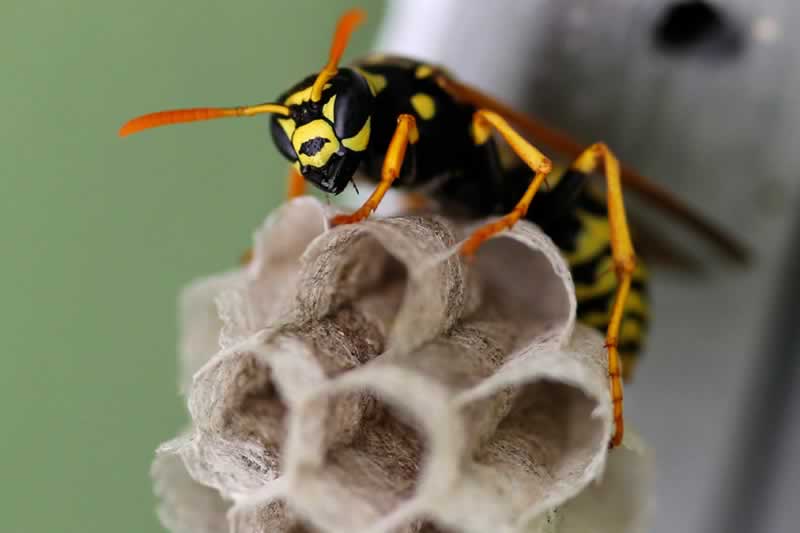 That’s why today, we’ll be looking at how you can get rid of wasps safely and effectively.

How dangerous are wasps?

Well, that actually depends on the specific type of wasp that’s living in your garden. There are several types of wasps and similar insects, including paper wasps, hornets, and yellowjackets. Some will be more docile than others, but it’s still inadvisable to get too close to a wasp nest. If unsure what type of flyers they are, best to assume the worst and keep your distance.

How can you get rid of wasps?

Wasp traps are a commercial and highly efficient way to get rid of wasps from your yard. The way these hanging traps work is by featuring a liquid that’s highly attractive to wasps. Unable to resist, the wasp will make its way into the trap, but once there, it will become stuck, and drown. Wasps are an unpleasant, though very effective way to get rid of wasps, though do make sure you replace them often, to maintain the efficiency. Alternatively, you could try making your own DIY wasp traps by using cut bottle bottoms, and a mixture of soda or fruit juice and dishwashing liquid.

By far the easiest and one of our favorite choices, if you’re struggling with a wasp invasion, is to call a professional pest removal company. Make sure you opt for someone who deals with wasps, to avoid unpleasant misunderstandings. Companies like Squash Pest Control help by assessing the size and gravity of the situation in a quick inspection, then jumping into action. Not only are they prepared to remove the wasp nest itself, but they will also identify the main attractions for the insects. By removing these, pest control companies can help prevent future invasions, as well as combat current ones.

You can purchase various insecticides to spray straight onto the wasp nest, in order to kill off the wasps. Alternatively, you can make your own spray mixture using dishwashing liquid and water. Whichever one you opt for, make sure you spray the nest from a safe distance, otherwise the wasps risk becoming agitated, and attacking you. In most cases, one spray won’t be enough, and you’ll need to repeat the process for at least three or four days, to make sure you get rid of the entire nest. You can also use such a store bought or home-made spray to kill off individual emerging wasps, and potentially prevent a full-on infestation.

It’s not enough to just kill off the infestation!

One of the biggest mistakes homeowners make in dealing with a wasp infestation is focusing too much on the existing wasps, and not considering adjacent concerns. Yes, it is important to remove the existing nest as quickly as you possibly can, to contain the infestation, and reduce danger to yourself, your family and your pets. But once the immediate threat has been eliminated, you’ll still need to consider the bigger picture.

What attracted the wasps to your home?

Wasps flock to human homes for a number of reasons. They may be looking for shelter, which things like insulated walls or crevices in the home can easily provide. Depending on the location of the nest, look for cracks, or other warm, safe places, and eliminate/fix them. Wasps are also attracted to food sources, such as flowers, food leftovers, as well as free access to sugar. Remember, it’s important to eliminate what attracted the wasps to your home in the first place, and not just the wasps themselves, otherwise you’ll find yourself dealing with another invasion presently. Once again, this is something a pro pest removal company can help with – it’s not just about countering the wasp infestation, but also about preventing future issues!