Different Types of Wood and Their Uses

Wood comes in various shapes and sizes. And its uses are as diverse as the tree species where it comes from. Generally, wood is the primary raw material for most carpentry work and various other forms of woodworking projects. It is also used in the construction as well as boat making industries. 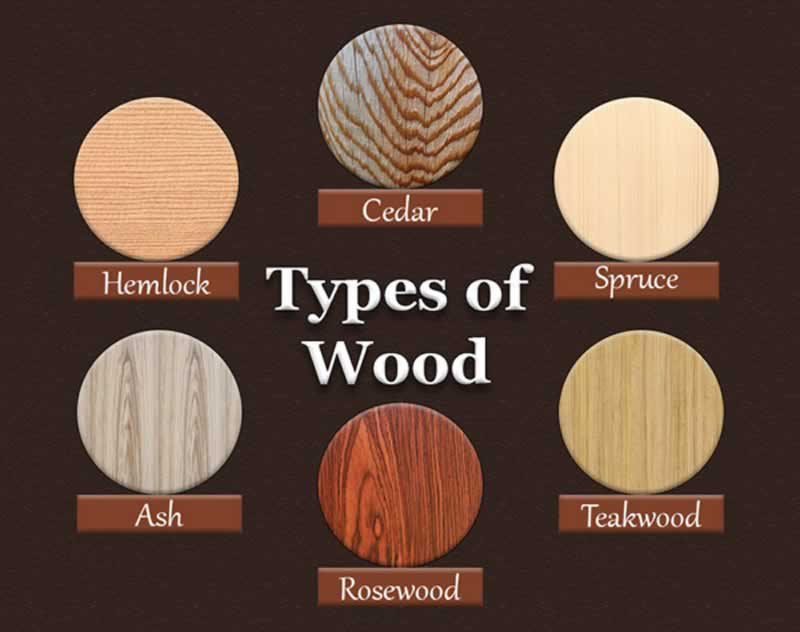 Whatever you intend to use it for, it is imperative that you first establish if it is the right kind of wood for that particular project. And in determining the suitability of a given piece of wood for your project, you should begin easy by understanding the various types of wood out there. Read on for an insightful view of the common types of wood for woodworking, along with their applications.

Softwoods refer to woods that are processed from coniferous trees. The process by which wood and lumber are obtained from trees is known as milling. Conifer trees are trees that produce cones and needless. Examples include fir, cedar, pine, redwood, and spruce. Softwood trees are scientifically known as gymnosperms. 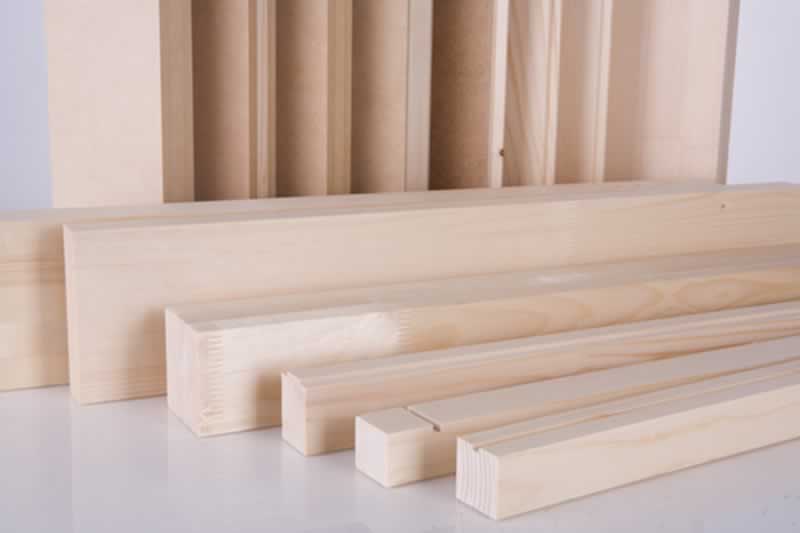 Softwoods like spruce, fir, and pine are commonly used for various home improvement projects. Examples of such projects include framing new buildings, home renovation and remodeling projects, as well as design of outdoor furniture. The main reason why softwoods make an excellent option for most building projects is due to their resistance to decay, insects, and vermin.

Hardwoods are obtained from tree species that do not produce cones and needles. Instead, these trees produce seeds and leaves. Hardwoods are also known as deciduous trees, and go by the scientific name angiosperms. There are certain monocotyledonous trees such as palm and bamboo that are also categorized as hardwoods, even though they are not deciduous. Examples of hardwood trees include oak, teak, mahogany, cherry, walnut, and maple. 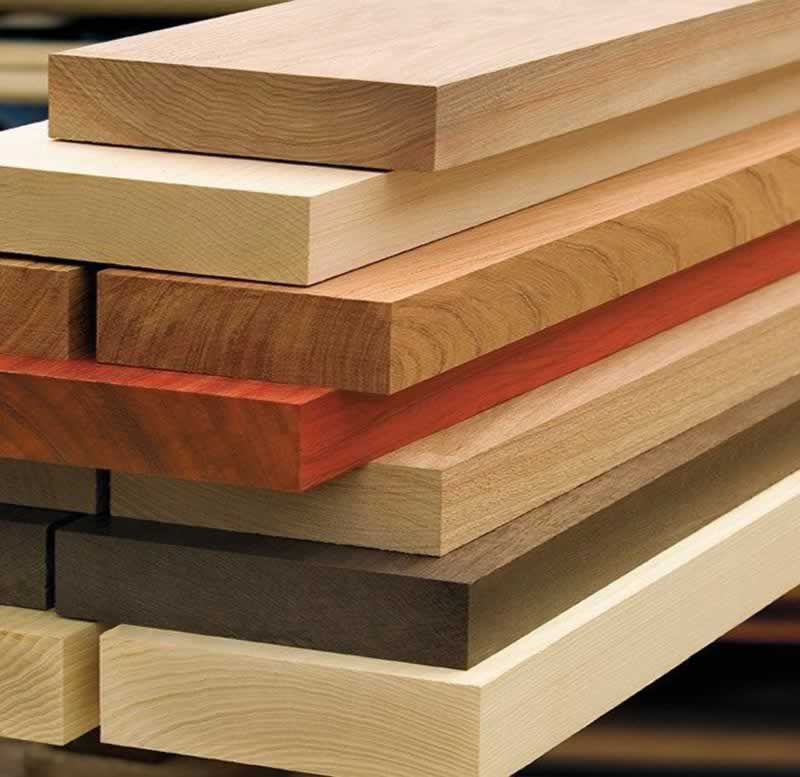 As we have already mentioned, hardwoods should not be distinguished from softwoods merely on the basis of their strength. However, most hardwood trees are known to be strong. They also come with distinct grain patterns. Like softwoods, hardwoods are used in various building and construction projects as well as in furniture making. According to woodcritic.com, hardwood is best for making wooden tabletop. Certain kinds of hardwoods, such as teakwood, are used in the production of veneer.

As the name suggests, these are woods that are engineered for specific purposes. Unlike hardwoods and softwoods, engineered woods do not occur naturally. Instead, they are generally made from the waste woods of sawmills. Instead of chucking them into landfills, these wastes are recycled and treated using heat or certain chemical products. 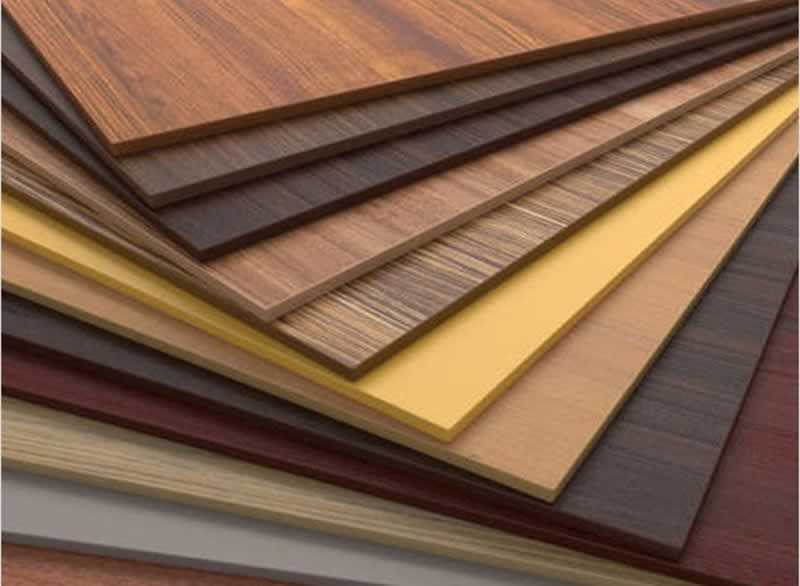 This kind of treatment models these woods into the desired shapes and sizes, and for specific applications. Examples include medium-density fiberboard, wood veneers, plywood, composite board, and strand board. Applications vary depending on the level of treatment. But generally, engineered woods are used in interior decoration projects such as construction of kitchen cabinets.


Other Types of Wood and Their Applications

Balsa is known for its remarkably light weight. That makes it ideal for craft-type projects. Due to its light weight and ease of use, balsa wood is often recommended for rookie woodworkers.

And thanks to its buoyancy, balsa is used in the making of boats, rafts, surfboards, life preservers and any other structures designed to float. If using it in woodworking projects, do not assemble balsa wood using screws or nails and be sure that you always secure a reliable room for sawing. Due to its weakness, you are better off using glue.

Aspen is known for its light color. That is an added advantage when looking for wood that’s easier to paint, or one that conceals stains. Aspen is not very abundant, which makes it a little costly to acquire. The wood is a very poor conductor of heat and is highly resistant to moisture. 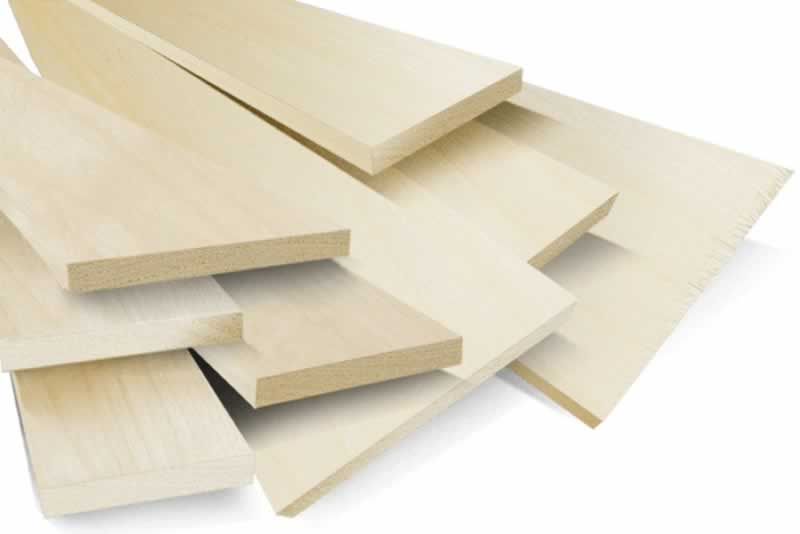 That combination makes it ideal for use in the construction of saunas as well as the production of matchsticks. Since it is also odorless and tasteless, aspen may be used to make chopsticks and various kitchen utensils.

SPF stands for Spruce, Pine, and Fur. These types of wood are often sold together under the umbrella name SPF, due to their similarities. The main application of SPF lumber includes framing of interior walls. When used in construction, SPF lumber is usually hidden, either underneath the wall or inside other woods. This wood is generally weaker and cannot be used for outdoor constructions, unless engineered for that purpose.

SPF lumber is highly sensitive to changes in temperature and moisture. Therefore, you should buy it only when you can use it immediately. That way, you will avoid cases of warping, shrinking, or swelling which would then make it useless for the intended purpose.

Rosewood has outstanding acoustic properties. That makes it a perfect choice for the construction of various wood musical instruments such as guitars and pianos. The wood is exotic, which explains why it often comes with a hefty price tag. 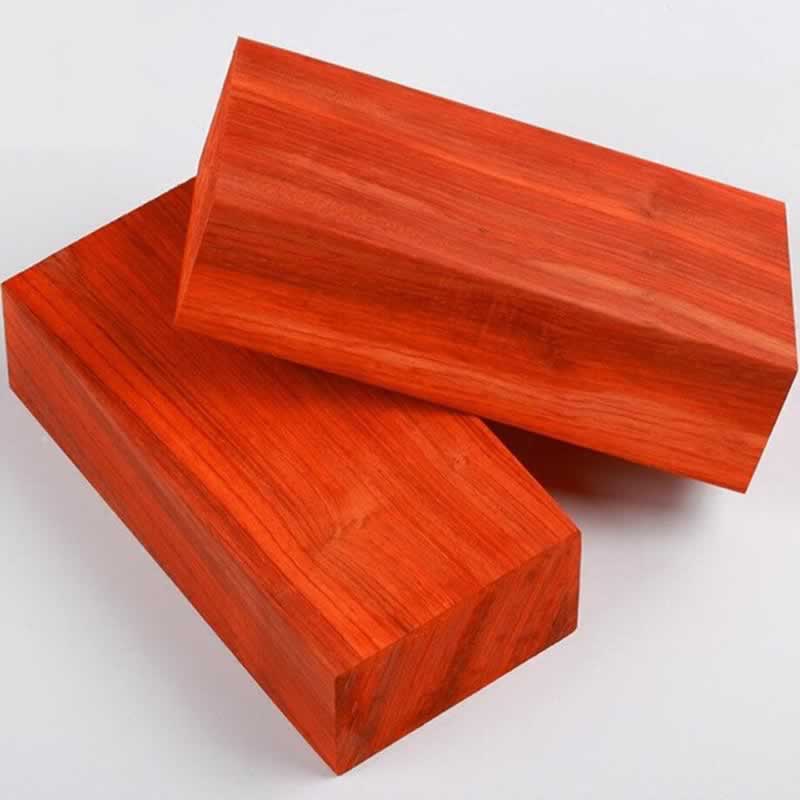 Rosewood is known for its skin irritating properties, which makes many woodworkers consider alternatives.

Larch is both a softwood and a hardwood. As a softwood, it produces cones and needles. And as a hardwood, larch tends to shed its needles in the same manner that most trees shed during autumn. It’s reddish-brown in color and is highly resistant to pests and decay, which makes it an excellent option for outdoor wood projects. 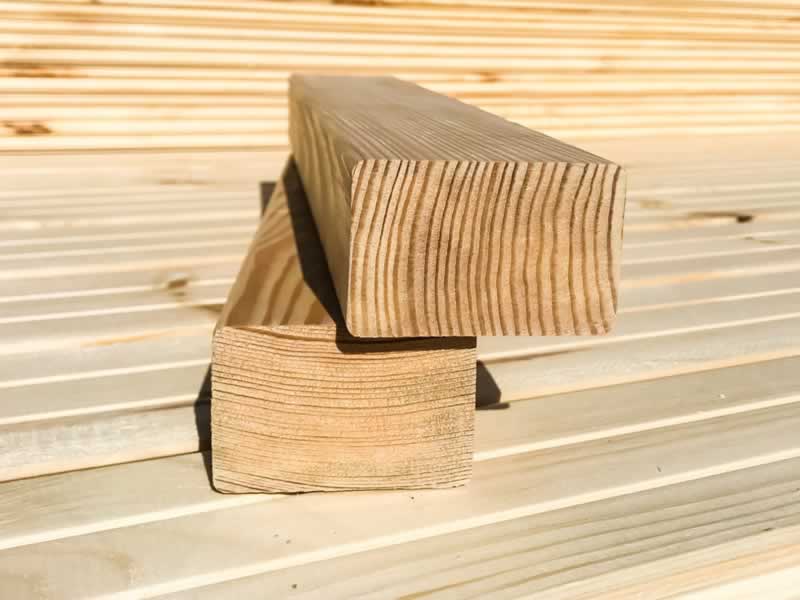 Its hardness, however, makes it prone to chipping and splintering, so you should handle it with extreme care. Tamarack is also notoriously irritating, thanks to the oils and resins that are naturally produced by the plant.

Mahogany is one of the most common hardwoods out there, though it’s more abundant in South and Central America. The wood has a pinkish color that gradually dissipates, leaving behind a shiny and radiant surface. 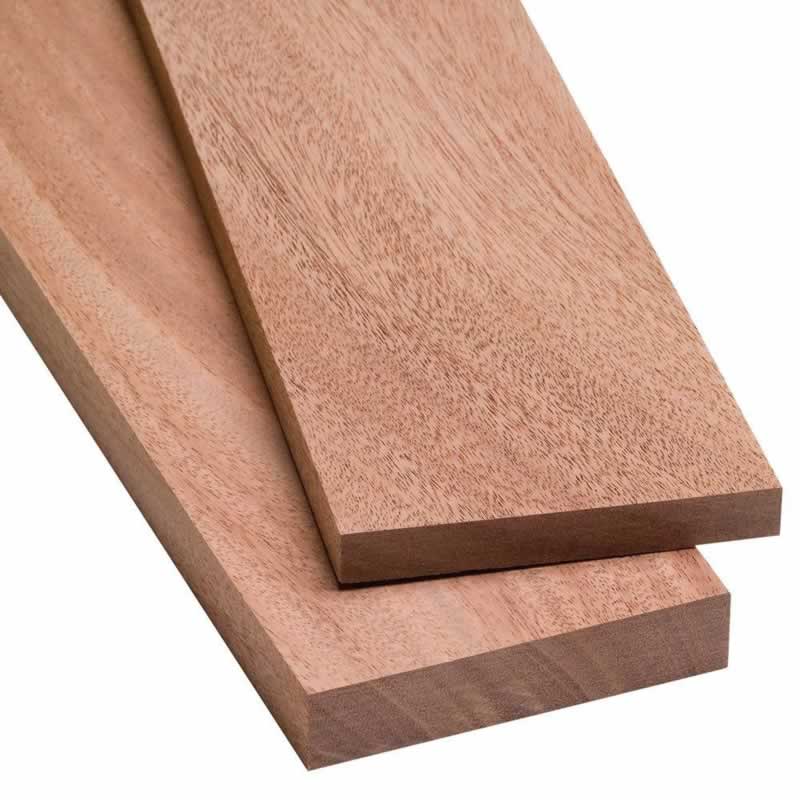 It is primarily used in furniture making due to its relative softness and stain-concealing properties. Mahogany is also used in the design of musical instruments due to its acoustic properties.

Alder wood combines aesthetics with versatility and workability. When freshly cut, alder wood appears white. However, the color turns to honey brown upon exposure to sunlight and air. Its grains are straight, making it easier to carve and process.

Though it is naturally radiant, its surface can be improved by sanding. The wood is a common choice for furniture making as well as the making of photo frames and bodies of electric guitars

It’s easier to classify bamboo as a grass and not a tree. However, its strength makes it suitable for various woodworking projects such as the construction of garden furniture, fences, and even hardwood flooring. 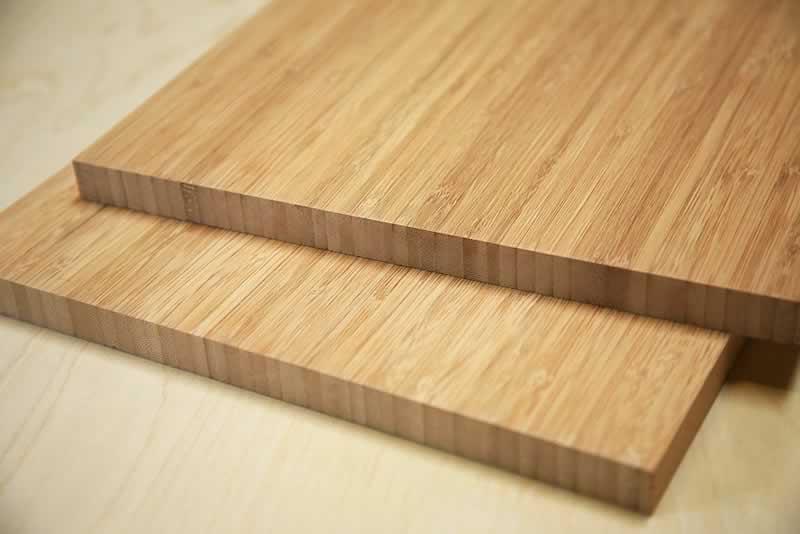 Bamboo is both moisture- and decay-resistant, thanks to its waxlike coating. It can also be processed and used in the production of veneers and plywood.

As you might expect, this wood is characterized by its zebra-like striping pattern. Due to its uniqueness and rarity, zebrawood is commonly used to design luxurious furniture. 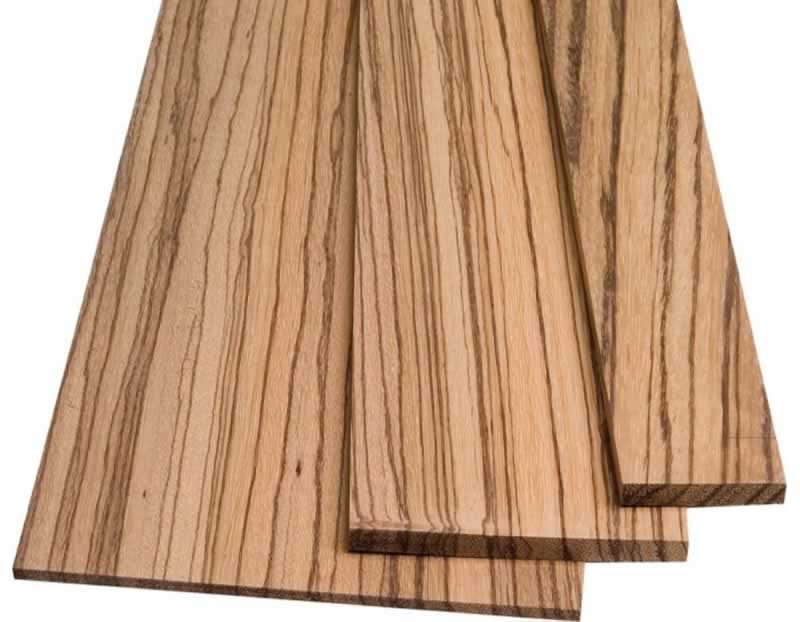 Zebrawood can withstand intense shocks and vibrations, thanks to its strength and density. That also explains why it’s a popular choice in making cars and guns.

Teak is known for its long maturation period, with a growing cycle that can last up to 60 years. It is commonly used for nautical crafts as well as in the making of high-end outdoor furniture. 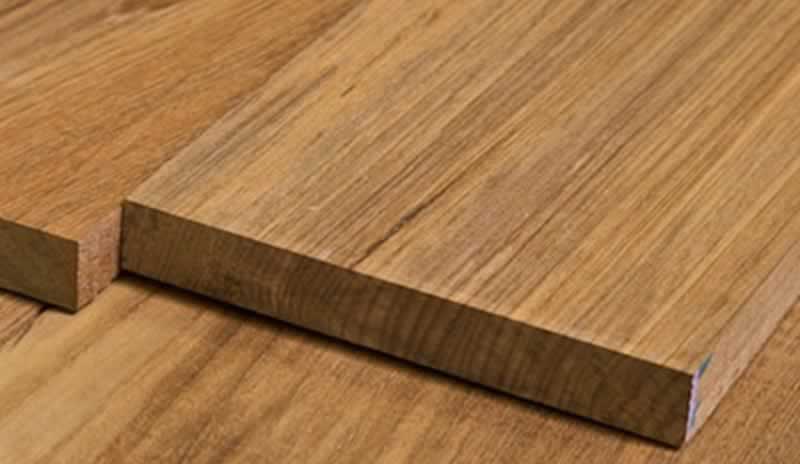 Teak is very hard and comes with an earthy aroma. It also produces natural oils that could cause irritation, in addition to making it difficult to glue.

Evidently, there are numerous types of wood for woodworking projects. Each comes with its distinct benefits and possible drawbacks. Before you choose any wood, do your due diligence to make sure that it matches the kind of project you wish to use it for.