Maintaining a greener lawn is at the forefront of successful home gardening in this modern era. However, the lawn’s green lush is always under threat from the effects of browning, spotting, or visible lesions. Ever wondered what causes this? If you have been curious about this matter, you could not have been in a better place. This article explores the common lawn diseases which negatively impact lawn green. It also goes on further to giving you solutions; after all, you deserve the peace of mind. 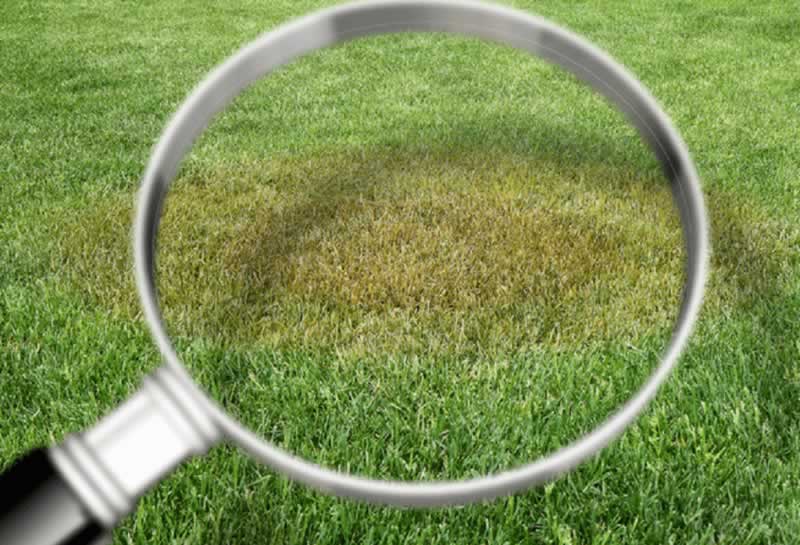 An unhealthy-looking lawn can be a sign of an infestation by the following diseases:

Be on the lookout for this disease during the warm, humid summer. Grass cultivars that are prone to attack include perennial ryegrass, tall fescue, and bentgrass. Early morning you will likely observe a dew-covered grass with a visible white mycelium of the fungus. Another characteristic marking the effects of this infectious disease are patches of lawn which appear curved in. If you have a tall fescue cultivar, you would also see the light brown lesions on each grass blade surrounded by dark brown borders. What do you do when this is the case? The best thing you could do is to strive to reduce moisture on the area infected. This guard against the spreading of the infection to the rest of the lawn. However, the worst scenario marked by severe infection coverage calls for the application of fungicides. A follow on which includes core aerating and over-seeding, would make sure your turf recovers fast. If you want to read more about Lawn-Aerating, Lawn -Dethatching, we recommend Poweredgrip has latest info and expertise opinion about lawn care.

The timing of this disease is a bit tricky, considering it appears anytime from early to late summer. It is prevalent in temperatures as high as 80 degrees with high humidity. You would see a white dead turf similar in size to a silver dollar coin, thus the name. It is more distributed in lawns that are cut 1-3 inches tall. The white dead turf is usually found clumped together, creating a large visible patched area. Your lawn is also highly susceptible to attack when irrigated throughout summer and when there is little nitrogen in the soil. Thus, you have only to irrigate when there is need, in other words, waiting for the soil to be a bit dry before the next irrigation cycle is encouraged. Additionally, always top-dress with nitrogenous fertilizers during grass’s active growth season. Fungicides are also applicable when combating dollar spot.

Like dollar spot, fairy ring attacks in late summer or early fall. It is marked by a cluster of mushrooms on the outer edge of rings. What the rings are is dark green fast-growing turf. Expect bands of infection, which are 4-12 inches in width. The origin of this devastating infection is mushroom fungi, which live and sprout from the soil. Some scholars attribute the existence of the rings to the organic matter decomposition due to the fungus. Contrary to popular belief that fungicides are the most effective solution, they will not work here. The best hope you have is to remove the top 6 inches of topsoil of areas killed. Go on to replace removed soil with sterile one and plant new grass.

This disease is prevalent just after winter once the snow melts, leaving the turf visible in spring. In terms of areas, it is prevalent in sections around driveways or sidewalks. You would observe a white crusted area in which grass blades appear denatured and matted together. What about the sizes of these areas? These can range from a few inches or up to several feet in diameter. Though gray snow mold kills the grass’s blades, it will not do so with the roots or crown. In this situation, raking-up and ordering up the infected areas does the trick by allowing air and that is one of the simplest tricks on how to get rid of snow mold. This, in turn, promotes new growth. Thus, you could skip the use of fungicides, especially if you are not a fan.

Leaf Spot and Melting Out Diseases

These diseases will be relentless with Kentucky Bluegrass, which is more susceptible to infection from April till early May. Cool, wet weather creates a conducive environment for the disease, causing fungus to thrive. Excessive application of nitrogenous feeds can worsen the situation. Try to limit it to approximately 1 pound of nitrogen per 1000square feet of turf. Application of fungicides in early April before it greens up is highly recommended. As a preventative measure, applying fungicides every two weeks until the end of May will save you headaches. However, a permanent solution involves aeration and seeding in the fall. This mainly works with diseases tolerant turfs like tall fescue. 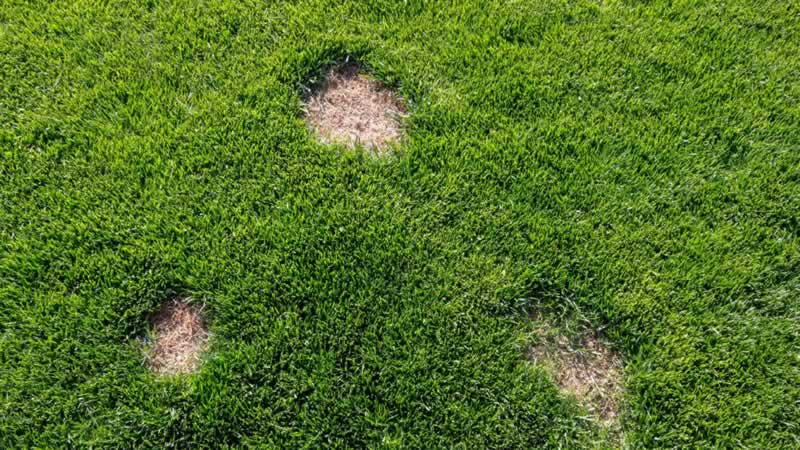 When guarding against this disease, pay particular attention to the choice of cultivar of the grass. Kentucky Bluegrass is most susceptible to powdery mildew, mostly when situated in shady areas. On the other hand, tall fescues are quite resistant. Poor air circulation is another recipe for encouraging such infections. Just what powdery mildew looks like? You would observe a gray-white, powdery growth on the upper surface of the grass blade. Fungicides are sufficient in combating powdery mildew.

Highly prevalent in moist and humid weather. Spring months are characterized by a temperature range of 65degrees and 75 degrees. You would observe a bright thread-like pink fungus mycelium on the tips of the grass blade. To treat this disease, you can use fungicides, but you could also skip them. The application of sufficient levels of nitrogen usually does the trick, with the red thread vanishing.

This Blight thrives in temperatures between 85 to 95 degrees. It all begins with 1/2 inch to 4-inch diameter spots. These may appear water-soaked then start to shrivel up. The last stage is marked by developing a light brown or gray color by the diseased patches. Another characteristic of these diseases is the presence of a white cobwebby in infected areas. To prevent this kind of infection from ever plaguing your lawn, you have to fertilize it adequately. Otherwise, fungicides are good for the treatment of the Blight and best applied before hot wet weather.

This fungal infection usually targets Kentucky Bluegrass and fine fescues. It is especially prevalent during mid-summer, with temperatures ranging from at least 82 degrees. Another interesting aspect of this disease is that it is common in areas that receive heavy foot traffic. These areas usually suffer from poor circulation and poor drainage. The infection usually kicks off as 2-3 inch circular patches. These increase in size till they are up to 12 inches. To identify the infection, you would notice yellowish-brown patches. Summer patch can be devastating to your lawn, easily spreading on a large scale killing the lawn. As a preventative measure cutting high your grass, core aeration, and seeding in fall all guard against this disease. If you are to use fungicides, then an application every two weeks has to be done. This might prove quite expensive; hence sticking to aeration and reseeding might be a better option.

It affects quite a wider range of grasses. These include perennial ryegrass, tall fescue, Kentucky bluegrass, zoysiagrass, and fine fescues. Conditions that promote infections are characterized by mild to moderately warm temperatures. With rusty lawn disease, you would observe some irregularly shaped patches on the turf. More so, you would see yellow specs, which shortly become rusty in appearance. It is also marked by orange like red pustules which cover grass blades. Fungicides are recommended when dealing with rusty lawn disease.

Avoid Over-Feeding the Grass: Be cautious not to over-apply nitrogenous fertilizer on your grass. This tends to weaken it, making it susceptible to attack by the discussed diseases.

Avoid Starving the Grass: Again, not applying adequate nitrogenous fertilizer makes your turf weak due to poor growth and development. In such a state, it cannot resist attack from the diseases.

Time Well the Fertilizing: For summer, grasses carry out fertilizing soon as the dormancy period is over. Avoid doing so in the fall to discourage re-emergence of the diseases once it gets colder.

Only Irrigate When It Is Necessary: Waiting till the soil is relatively dry before the next irrigation cycle is encouraged. When you irrigate, do so during the early morning while the grass is still covered in dew. This limits the time the soil is in a wet state by allowing for sufficient evaporation and draining.

Having said all of the above, I come to conclude that prevention is better than cure. It would be ideal for getting your soil analyzed by an expert before planting grass to provide the nitrogenous nutrient composition. This would help in ascertaining the exact quantities of topdressing needed and guarding against some fungal infections. In addition to this, a biological soil analysis can detect dormant fungi spores so that remedial action can be taken earlier. Finally, you could avoid all the hustle that comes with natural grass by adopting a synthetic one. Though synthetic, they are eco friendly and no common lawn diseases to watch out for.