What Are Cold Cranking Amps?

There’s nothing worse than it being a cold winter’s day, and then you turn the key in your car’s ignition and hear absolutely nothing. If you call out a mechanic, then he might start talking cold cranking amps which to most of us means nothing at all!

Well, this is the guide that’s going to explain all the key terms, including cold cranking amps, and help you to have a hassle-free start to your journey even when it’s freezing cold outside,

What is an Amp?

The standard unit for measuring electric power is called an “amp.” One amp represents a certain amount of electrical current flowing through a wire at any time. The amount of amps times voltage equals wattage or watts – one volt pushing one amp generates one watt, 10 volts pushing 2 amps generate 20 watts, etc. Amps are typically represented by the letter but can also be written as amps, A, or even fractions, such as 1/5th amps. Hotter-running electrical devices usually have either a higher current or voltage, so they’ll use more watts.

In an electrical circuit, the force that “pushes” electrons around a wire are known as voltage. The voltage causes electron flow, and the resulting moving charges produce an electric current. The SI unit for measuring voltage (potential difference) and current is called volt (V). One volt will cause one ampere (A) of current to flow through a conductor that has one ohm of resistance.

What are Cold Cranking Amps?

The Cold Cranking Amps rating indicates the maximum current in amperes that a battery can deliver for 30 seconds at 0° F without dropping below 7.2 volts. For example, an 800 CCA-rated battery can deliver up to 800 amps of current for 30 seconds before its voltage drops below 12.0 volts (7.2V x 800A = 5,760W). The CCA standard was created by the Battery Council International and was developed to provide well-defined standards for comparing automotive batteries under extremely cold conditions

Cold cranking amps, or CCA, is a rating that measures the ability of a battery to start an engine in cold temperatures. This rating tells you how many amps a battery can put out at 32 degrees F for 30 seconds without dropping below 7.2 volts. Because starting an engine demands such a high burst of power from the battery, the car battery gets drained very quickly.

A vehicle’s electrical system is made up of three components: the starting motor, ignition coil, and spark plugs. The battery sends an electric charge to the starter motor, which then engages the flywheel that turns the engine. When you turn your key in the ignition switch, an electrical current flows from the battery into the ignition coil, which then sends a high voltage through the spark plugs. When each of these four components operates effectively, your engine can start. A weak or dead battery slows down this process and affects your ability to get your car going. 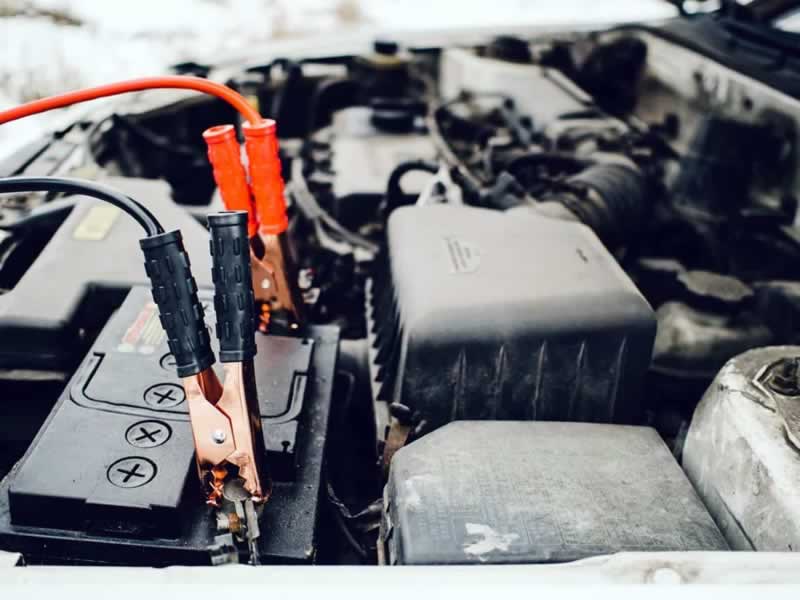 What About Cold Crank Amperes?

Cold-cranking amps are often confused with cold-crank amperes, which is a measure of the battery’s ability to deliver a 50 ampere draw from its rated voltage at 0 degrees F for 30 minutes. On the other hand, a CCA rating measures only the batteries’ cranking amps or peak current load at a temperature of 32 degrees F.

A battery on a vehicle that is not driven regularly will fall victim to a parasitic circuit drain. The more often the car sits idle, the more power drains out of the battery. Sometimes this problem can be remedied by simply driving your vehicle for 10-15 minutes or turning on some interior lights or other accessories before trying to start it. Make sure you do not allow the engine to overheat during this process because heat diminishes a battery’s cranking ability too. In modern vehicles with computers and electrical components, the keyless ignition switch may have an “accessory” position that allows electrical components such as radios and alarm systems to continue running while preventing draining from starting. But older vehicles may have few built-in protections against circuit drain.

How to Start Your Engine on a Cold Day

If you’ve ever tried to start your engine on a cold winter day, then you already know that it can be an exercise in frustration. When the temperature drops, so does your car’s ability to produce enough power to turn over the engine. Some modern vehicles have starting systems that will automatically compensate for colder temperatures and increase amperage draw from the battery for easier starting, but if yours doesn’t, there are a few tricks you can use to give yourself a leg up.

1) Make Sure Your Battery is Fully Charged: One of the most common problems when trying to start a vehicle in cold weather is a weak or dead battery. If your battery terminals appear dirty or corroded, they may need cleaning or replacement; otherwise, try the next step.

2) Use a “Boost” or Jump-Starting System to Get You Going: If cleaning your battery terminals doesn’t help, you may need the aid of an external power source to start your engine. Boost systems connect directly from your car’s battery to another vehicle’s battery with jumper cables and use the second vehicle’s alternator to recharge your battery while you’re driving.

In addition, boost systems can provide enough current for both vehicles when starting up in cold weather because they bypass the parasitic drain that drains a regular car battery when idle for long periods. The problem with jump-starting is that it requires someone else who has a running vehicle and jumper cables to be available, which isn’t always possible in an emergency situation. Boost systems and jumper cables can be hard to find when you need them most, so a portable jump-starter system is another alternative. These are designed to provide the power you need when needed, but they cost more than booster cables or even an in-car boost system.

If your car isn’t starting because of battery problems, you may need to test it with a car battery tester before attempting jump-starting. A simple test will be able to tell you whether your battery needs replacement—and if it’s worth jumping in the first place—safely without causing any damage. The key here is remaining calm and using working knowledge of your vehicle rather than panicking when trying to deal with cold weather starting issues.

A car that doesn’t start is inconvenient, but it’s also easy to avoid with advanced planning. Keep your car’s battery fully charged during the winter months, and if it becomes weakened or drained, use a boost system or portable jump-starter as backup power to get you out of trouble.