How to Change a Ceiling Fan Yourself

Ceiling fans are coming back into style as homeowners increasingly look for ways to lower their energy costs and live more sustainably. You can raise your thermostat setting by about 4℉ in the summer just by operating a ceiling fan, and you can even keep your home warmer in the winter by reversing the direction of the fan blades so that they push warm air back down from the ceiling. 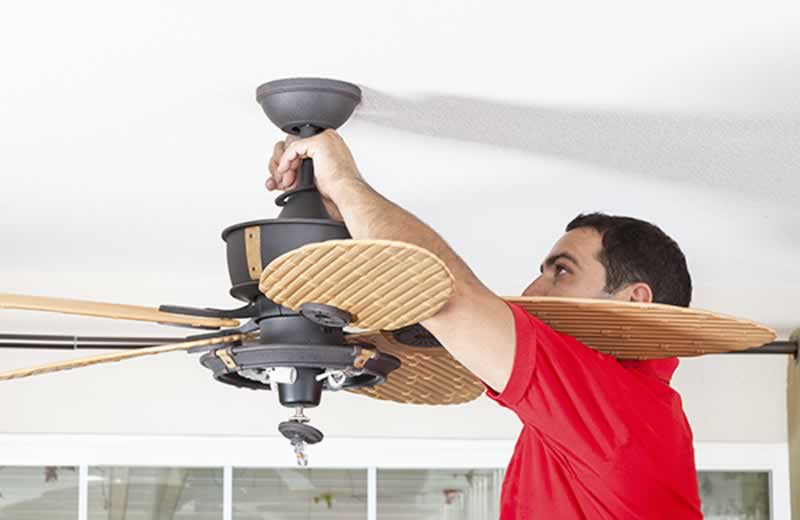 But if your current ceiling fan has seen better days, you don’t need to call an electrician to have a new one installed. You already have the wiring in place and, since you already have a fan there, you should even have the appropriately rated fan electrical box and brace in your ceiling. Here’s how to swap out your old ceiling fan for a new one. Also, you may check, are ceiling fans supposed to wobble? for other information.

Turn Off the Power

Since you’ll be working with the electrical wiring that powers your fan, you’ll need to make sure to shut off the power to the room where you’ll be working. Turn off the wall switch that controls the fan too, just to be on the safe side. Use a headlamp if you need to shed some light on your work.

You’ll need to climb up on a ladder to remove the old fan from the ceiling, but place the ladder so that you can climb up and reach the fasteners that attach the fan to the ceiling, while still keeping a hand on the fan motor so it doesn’t crash to the floor when you loosen the fasteners. Once you’re up there and have your ladder in the right place, take a look at the canopy that covers the hanging bracket in the ceiling and the wiring. Loosen the screws that hold it in place to expose the wiring and mounting plate.

Next, disconnect the wiring by removing the plastic wire nuts and untwisting the wires where they’re twisted together at the ends. The ground wire coming out of the fan motor, which is green or bare, may be attached to a bracket in the ceiling or wrapped around a tightened screw in the mounting plate. Loosen that fastener to free the ground wire. If your fan has a downrod, you may need to remove the locking nut that secures it to the fan motor and remove it in order to access the wiring connections. However, wiring is typically pulled up through the downrod in order to connect to the house wiring under the canopy. Once the canopy and motor housing are freed from the mounting plate, and the wiring is disconnected, you can pull down the old fan and set it aside. 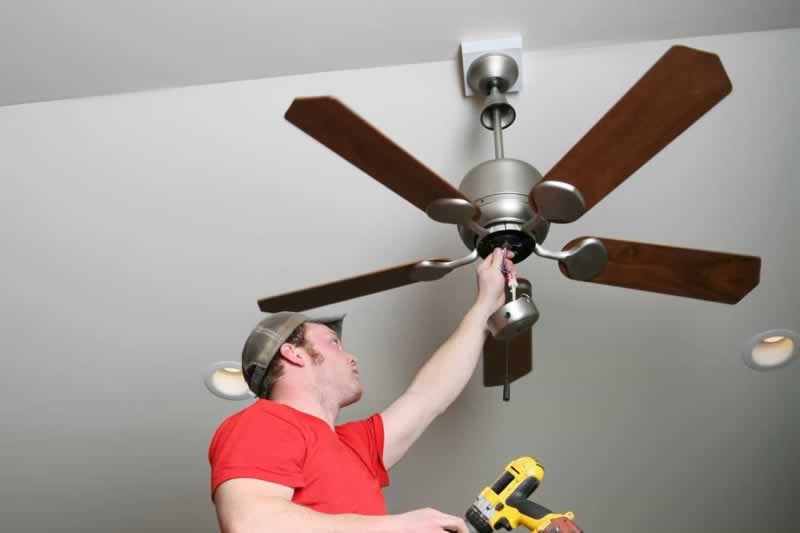 Your new farmhouse ceiling fan should come with assembly instructions, and you’ll need to assemble the motor housing on the floor before you climb back up on the ladder to attach it to the ceiling. Make sure your old fan was securely attached to a fan-rated pancake electrical box screwed right into a joist or into a ceiling fan brace secured between two joists. Remove the old mounting plate and install the new one that comes with your fan by screwing it into the electrical box. Feed the wires in the ceiling through the ceiling plate, then through the canopy. Attach the canopy to the mounting plate. Next, feed the wires through the downrod and thread the downrod into the canopy.

Finally, attach the blade irons to the fan blades and then fasten the blades to the fan motor. Plug in the light fixture or wire it up if necessary, following the same wiring diagram you used to wire up the fan motor — white to white, black to black, and green to green. Screw in light bulbs and attach the glass light shades. Restore power to the circuit and enjoy your new ceiling fan!