How Do You Sharpen Hedge Shears?

There’s not a lot you can do with blunt hedge shears. Aside from not bringing results, they also make your job a lot tougher. However, regularly sharpened hedge shears for your garden are another story. 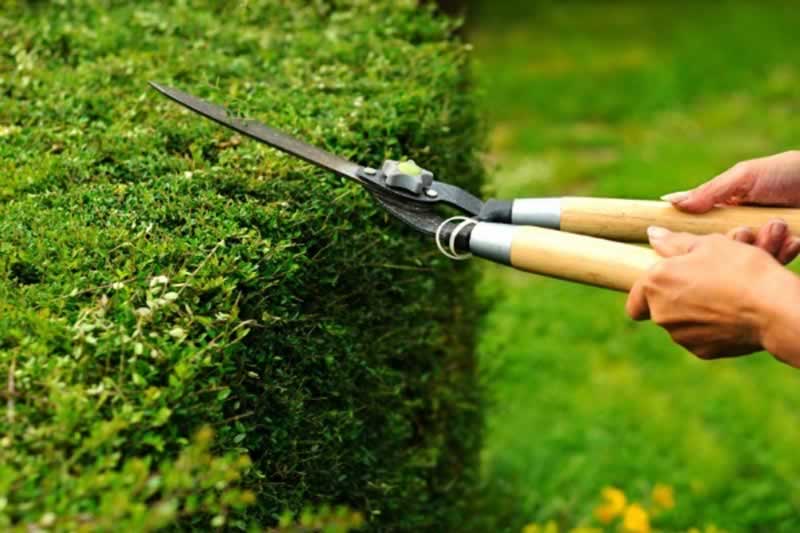 So, how often should hedge shears be sharpened? The rule of thumb is to do it when the blades no longer cut a hedge or branch cleanly. Today, we’ll go over a quick and easy guide to shear sharpening so that you can garden with minimal fuss and bother in the future.

How to Sharpen Hedge Shears in Seven Steps

Sharpening garden shears is a straightforward process, as you’ll soon find out after going through the steps below.

Before subjecting the blades to some good old sharpening, make sure to clean them first. Stuck-on dirt and debris can impede the sharpening process, resulting in blades that are either as dull as or even worse off than they were pre-sharpening. Cleaning starts with a container of warm, soapy water and a stiff brush. Dip the stiff brush into the mixture and use it to scrub both sides of the blade. Once done, rinse the blades properly and dry them off using a cloth or a rag.

It’s better to be safe than sorry, especially when handling sharp items. So, wear your protective gear, which should include a pair of eye goggles if you happen to be sharpening using an angle grinder.

Although there are other items for sharpening shears effectively, it’s difficult to beat the multi-sharpener in terms of ease and convenience. With this tool, you have a set of blades that can sharpen your shears with as little effort as a couple of swipes. A model with a tungsten carbide edge is more durable, so you might want to go for that. Quality multi-sharpeners abound in the market, and most of them probably won’t cost you any more than $12. 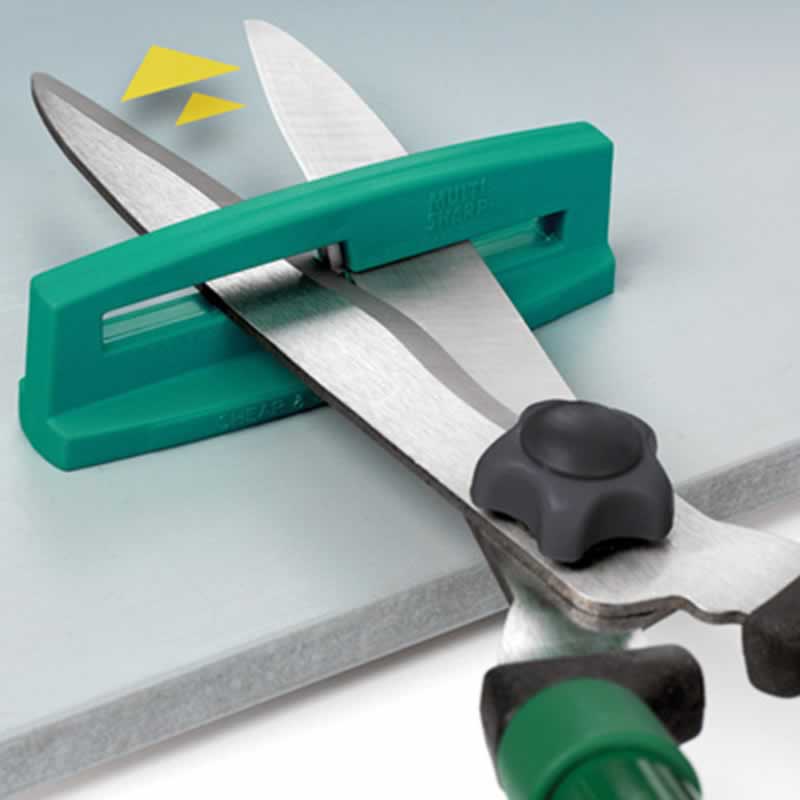 Open your garden shears so that you can extend those blades and get as much sharpening coverage as you can. If your shears extend until they become a wide “X,” that would be even better. You have to be able to sharpen along every part of the blade for optimal results. Make sure to grasp those handles firmly while you do.

Step 5: Use your sharpening tool.

Start by pressing the tool at the bottom of one of the blades. Then, glide the tool to the top of the blade using a swift movement. Do it carefully so that the tool doesn’t slide sideways off the blade. Repeat this twice or thrice more until you’re satisfied with the sharpness. Then, repeat the process on the other blade.

Step 6: Check the edges of the blade.

What tells you if you’re sharpening correctly are the blades’ edges. If they give off that glint indicative of sharpness, you’ve done a good job. However, if they lack shine, you could be holding either the blade or the sharpening tool incorrectly. You might also be sharpening at the wrong angle. That’s easy enough to remedy, though. You just sharpen the blades again, gently and more firmly this time. Plus, make sure to glide carefully along both sides of the blade.

Step 7: Oil down those edges.

A little bit of rust prevention is required after sharpening. You can do this by applying some oil to the shears. Some multi-sharpeners double as oil applicators and allow you to skip this process entirely. However, if you don’t have one of this type available, don’t overlook this step for keeping your shears shiny and rust-free.

Now, that didn’t sound too difficult, did it? Armed with the right tools, transforming dull blades into razor-edged ones shouldn’t be too stressful. Typical tools for sharpening garden shears come in the form of the following:

A mill file is a long metal file designed to sharpen a wide range of garden tools, including hedge shears. Even so, it’s best used on hoes, shovels, and lawnmower blades.

A sharpening stone can either be an artificial or natural stone for sharpening tools. It usually takes the form of aluminum oxide or silicon carbide.

An angle grinder is a handheld tool affixed with a circular, rough disc along its end used for a variety of sharpening purposes. Now, this one has shears sharpening written all over it. It’s just the perfect shape and design for sharpening those large blades.

Many of us might love spending time in our gardens, but that doesn’t mean we want to spend more time than necessary on its maintenance. Effectively manicuring lawns and hedges in no more time than is required calls for a pair of shears with razor-sharp blades. Use everything you’ve learned in this guide to make garden cleaning and maintenance easier than ever.