Mortise and Tenon joints are an extremely old construction technique that has stood the test of time and is still being used today. You can find examples of this ancient joint even in Egyptian furniture thousands of years old. Tenon is an old-time name for a square piece of wood that sticks out from the end of a board, and the mortise (or mortice in UK) is the square hole that the tenon fits into. Mortise and tenon joints are extremely strong and the technique can be scaled up or down in size with great success. It is used extensively in cabinetmaking for joining rails to legs or stiles, and in many other constructions well. When properly designed, proportioned, and well made, mortise and tenon joints are strong and neat in appearance and they’re much stronger than other types of joints and you don’t need to fix the gaps in the joints. 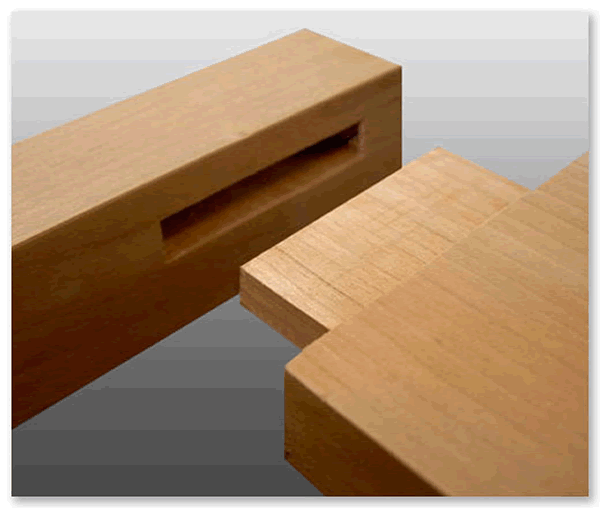 Types of mortise and tenon joints

Mortise and tenon joints come in several types like stopped/blind, through, angled, wedged, and many more, but they all consist of the same basic parts: a mortise and a tenon.

Through mortise and tenon joint is an extremely common joint that is formed by cutting the mortise completely through the stile and sizing the tenon to match. The end of the exposed tenon can be further secured by adding a very narrow slot, either diagonal or straight across the width of the tenon, then inserting a solid wedge into the slot once the joint has been assembled. This can greatly strengthen the joint’s holding power, but care should be taken to not split the joint apart by using an overly thick wedge.

Wedged mortise and tenon joint is a mortise and tenon joint that is  strengthened by the addition of a wedge. A thin kerf slot is cut into the end of the tenon, then after the tenon is inserted into the mortise, a wedge is inserted into the slot to secure the joint. Wedged joints such as these may not even require any glue, especially if the mortise is tapered to be wider at the wedge end, so that the joint can not be pulled apart by brute force.

Haunch mortise and tenon joint consist of a haunch which is basically a short tongue that protrudes from the rail’s shoulder, between the rail’s edge and the tongue’s edge. When a mortise and tenon joint is constructed with a stile that has a groove through which a tenon is cut, such as in frame and panel construction, the normal technique for forming a mortise and tenon would leave a void at the end of the slot, and this void would be visible on such assemblies as panel doors. In order to compensate for the slot, a haunched tenon is constructed so the haunch fills the groove at the tenon’s edge. Depending on the final use, the rail can have a haunch on only one side, or both sides, as required.

Loose mortise and tenon joint is constructed by mortising both the side of the stile and the end of the rail, and then inserting an appropriately sized tenon during glue up. Even though the tenon is not integral to either piece, it still creates plenty of long grain to long grain glue surface to create a very strong joint.

Double mortise and tenon joint is used for rails that are more than ten times their thickness. This means that a standard 3/4-inch thick board move than 7 1/2 inches thick should be treated this way. The proportion between the tenon and the spaces between is the key, and not the actual number of tenons. It is recommended that the space be divided into thirds, two-thirds being tenon and one-third being space, equally distrubuted along the end of the rail. If the rail is of a material that is prone to cupping or warping, you can leave a short haunch between the tenons and notch the mortise to match.

How to make a mortise and tenon

We will not go into details on how to make a mortise and tenon joint and that would probably be a topic of another article but we want to simply point out the most common ways for making mortise and tenon joints. There are as many ways to cut mortises and tenons as there are varieties of the joint, and there are options for all budgets and skill levels. Probably the most common way to cut tenons is on a table saw, using some kind of tenoning jig for table saw that holds the pieces upright. But you can cut them with a handsaw too, or on a bandsaw (check out our JET 14″ bandsaw review) for that matter.

Mortises are usually cut in any of three ways: simply by drilling out the waste and then chopping the mortise square with a chisel (check out our Chisels guide), by using a router and a straight bit, or with a hollow chisel mortiser, which is a dedicated mortising machine. And since woodworkers cut so many mortises, there are even pricier jigs and machines that make the process even faster and easier.