How to get rid of moles 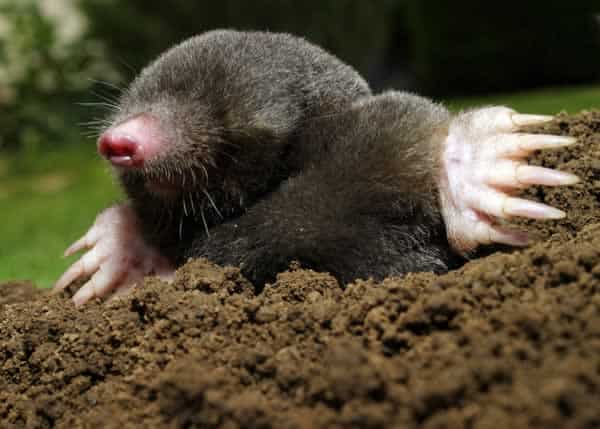 There is no worst feeling for a gardener or a homeowner than seeing a dozen mounds in your garden or lawn in the morning. If you ever tried to battle with moles then you know that you have to win many battles in order to win in a war against moles. Some will say that few moles can be rather good for your lawn, because they can aerate the dirt and stay in one place for not too long. But excessive moles are able to cause serious problems with uprooting plants and irrigation and in most cases with one mole comes another and before you know it your whole lawn is nothing but mounds.

Moles are burrowing insectivores and they grow to be 6 to 8 inches long and have gray to black velvety fur, slender hairless snouts, small eyes and small ears. Moles’ large front feet have long claws that dig much like a hoe. Except for breeding season in early spring, moles tend to live alone, so the multitunneled pattern in your yard is likely home to only one mole.

Before you learn how to get rid of moles, you need to learn how they live. Moles build new feeding tunnels constantly and may not use the same one twice. You may find entry and exit mounds and the are usually round and symmetrical, pushed up volcano-fashion by the mole. The hole usually has dirt in it but remains visible. The mounds are always connected to main runways, which moles use repeatedly and they are 12-18 inches underground and not usually visible. Moles feed on insects and insect larvae, but their preferred dinner includes earthworms and white grubs. Given a choice, moles pick moist, sandy loam soils over dry, heavy clay soils. They are most active during warm, wet months, although they live underground year-round.

Young moles grow rather rapidly and behave like adults being only one month old. Young moles establish their own burrow system and territory at the age of 6 months. Generally, one acre of land is large enough to support 2-3 moles at a time. However, yards surrounded by large tracts of forested-weedy areas may be the subject to continual mole invasions. 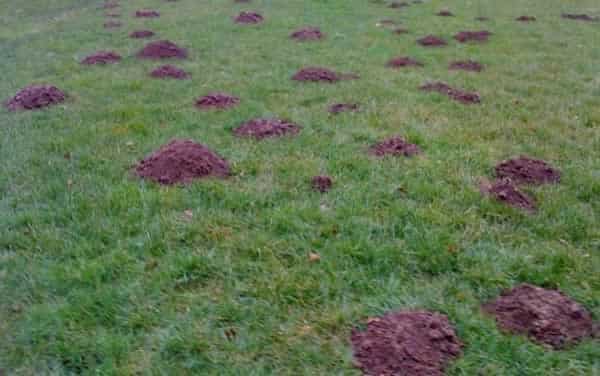 DIFFERENT WAYS HOW TO GET RID OF MOLES

This is one of the oldest and most common methods but you have to be very fast and very skillful in order to catch the mole with this method. Use the back of a shovel to flatten out and pat down any mounds that you’ve noticed on your lawn or garden. Then remove yourself to a vantage point elsewhere on the property, somewhere at a distance (ideally downwind) from the patches of earth you’ve shoveled over. If a mole catches your scent in your air, or if your footsteps send vibrations into the ground, the mole isn’t likely to show itself. Wait patiently and be as still as you can be until you see a disturbance in the soil caused by the mole returning to repair the hill you’ve covered. With two shovels in your hands, rush to the disturbed area and plunge the shovels into the ground, one on either side of where you saw the ground move. The mole should (theoretically) now be trapped in the small section of its tunnel between your tools. Dig the mole out and remove it as far as you can from your property.

One of efficient ways for dealing with moles is that you dig a mole barrier. A mole barrier is a trench 8 to 12 inches wide and 24 to 36 inches deep around the area you wish to protect. Simply fill the trench with gravel and cover it back up. This method is efficient but not very practical for larger gardens or lawns because it involves a lot of work.

Those two methods usually don’t work and we tried it also and failed, but since some people swear that they managed to deal with moles with those two methods we decided to explain them here. Creating a pit trap involves digging into a mole tunnel and placing a large jar with the rim level with the bottom of the tunnel. Cover the tunnel with a board to keep the light out. Check the trap and release mole into the wild when caught. Flooding the hole is simply inserting a garden hose into tunnel and flood the tunnels for hours. We ended up with a huge water bill and even more mounds than before.

This method works in vegetable gardens but it is useless on lawn because it involves planting vegetative barriers for moles. Natural mole repellent are simple as planting vegetative barriers throughout the area that deter moles and this includes plants like daffodils, marigolds, alliums, and fritillarias, mole plant and castor beans. Although mole plant and castor bean plant can be used to repel moles, both plants are considered poisonous and should be avoided around pets and children. Although this is an effective method it involves a lot of patience for plants to grow and you again need to remove the moles which are already in your garden because you can not plant your whole garden with repellents.

Mix a simple mixture of 1/2 cup of castor oil and 1/2 cup of liquid dish soap and that will keep moles at bay. Combine the two ingredients in a jar and keep this on hand. When you’re ready to use the repellent, mix 3 tablespoons of it with a gallon of warm water. Pour this solution into a watering can and then pour it on the areas of the garden where you don’t want moles to go. Don’t saturate the area with the solution, just dampen it. This actually drive moles away but you must be patient (2-3 months of repetitive watering) to keep the moles from your garden for good.

Those are DIY methods that people often try but with mixed results. We tried them and there were almost no improvement in the number of mounds in the yard. The bottle method involves opened plastic bottle on the stick or half buried in the ground and the vibrations keep the moles away. Windmill method is very similar and it involves kids windmills on wooden stick which vibrates when spinning and also, supposedly, keep the moles away. 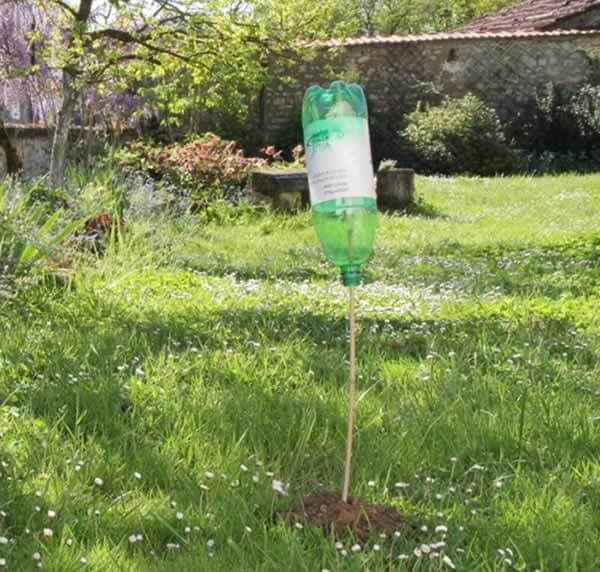 Some dogs or cat very efficiently hunt mole and some don’t even try. Trained dog or cat can be super efficient in dealing with moles but unfortunately without training they simply don’t mind the moles. It is best to find a dog which is trained and leave your dog with him for a couple of weeks to learn.

Solar mole repellers work on the same principle like bottles and windmills and they produce vibrations which, supposedly, scare off moles. Like the bottles and windmills their range is very small, around 5 yards, and don’t trust the label which says that only one is sufficient for the entire yard. If you don’t mind a repeller every 5 yards then this is an efficient method for dealing with moles.

Gas cartridges and smoke bombs are unreliable and their effectiveness is probably compromised by the extensive nature of mole tunnel systems and because gas diffuses in soil. Moles will seal off their burrows in seconds when they detect smoke or gas. If you are using gas cartridges, use them only on moles that have just invaded an area, as their burrow systems will be less extensive. Apply cartridges in two or more locations of the main tunnel (not shallow feeding tunnels) of what you believe to be the burrow system of one mole. Wetting the soil surface of the garden or turf prior to the application will aid in trapping the toxic gas in the soil.

Since moles feed on insects and worms, poisoned baits have proven to be ineffective. A new gel-type bait has been registered for mole control but it has not been on the market long enough to determine its control value for moles. If toxic mole bait is used, follow all label directions to prevent the possibility of poisoning non-target wildlife species, domestic animals, or humans.

The most effective method for dealing with moles is without a doubt a mole trap. There are various types od mole traps on the market and they are almost all very effective when positioned properly. Follow the instructions carefully and you will catch the mole. Moles possess a highly developed sense of smell. We recommend that you either wear gloves while handling the trap or rub your hands thoroughly in the soil before handling in order to keep human scent to a minimum. Many gardeners wear gloves but after handling gardening chemicals or oil and gasoline from the lawn mower, the gloves possess a strong scent of their own.

Mole traps are only sure thing for mole problems but you have to be patient as it can take up to couple of weeks to completely clear your garden or lawn.