How to Catch a Smart Rat | Most Effective Ways

If you think that catch mice are easy to catch, think again. You probably don’t have a rat in your house. But, if you do, catching it might be challenging. They are notorious and very smart for knowing when to avoid traps. They are curious too with a new object that you refer to as bait in their surroundings.

If you are feeling frustrated with the rats inside your house now and you have been trying a lot of traps but none of them work, then we have good news to help you out of how to catch a smart rat.

How to Catch a Smart Rat | Step-by-Step Guide

Rats are smart animals and there are some factors which make them hard animals to catch because:

Rats mostly have incredible cognitive learning abilities compare to humans. They are also fast in learning something new especially new objects. Rats think far simpler and so is their thought processes. So, you need to know what you are dealing with if you catch a clever rat in your property.

If you have time to learn the behavior of rats, you should know the type of rat that is in your house. Roof rats are usually in the trees, attics, and roofs. The colors are usually dark brown or black. They have got big ears and a long tail compares to the whole body. Roof rats’ favorite foods are grains, nuts, and dried fruit. They are quite fussy eaters. You can find Sewer or Norway rats in the ground level areas and basement. Their tails are a little bit shorter compare to the rest of their body that is brown. They usually eat almost every type of food including vegetables, fish, nuts, dried fruits, and raw meat. Rats are like mice too since they can move their bodies carefully along edges and walls. It is very rare for us to see a rat scurrying in a room that is open. So, how to catch them? You need to put the Most Effective Rat Trap along corners and walls and the correct bait that can lure the mouse out. With this method and strategy as the best way to catch rats, you can catch them in no time even the smartest one.


Give Time for Rats to Get Used to

Rats are not the same as mice. They do not get the trap easily like mice. They have high curiosity about kinds of stuff which show suddenly in their environment and they will turn out playing the traps and avoid them. You need to know the trick of how to catch mice especially the smart one by making a safe trap. You should be able to make the rats get used to the new trap you have prepared by conditioning the trap that it will attract the rat. You can also place several traps in the areas where you think there are proofs of rats. Place them along walls too. Then, put the food on the top and next to the traps and check if the traps are free from armed. Give times for the rats eating that food for the first and two nights before you actually put the trap.

Letting the rats accustomed to the traps is always a great idea especially with the unarmed traps for a day or two. After that, you are ready to set the armed trap. When the rats find new food, they will inspect it first and try a little bit as a tester by stretching their neck. The rats will return to the unarmed traps and find the food again if the new food doesn’t give any harm to them. A colony of rats may also give a chance first to a naïve and young rat to taste the food too. If they are okay, then the smarter and older rats will trust the new object is safe. And that’s the right way of how to catch and kill rats. 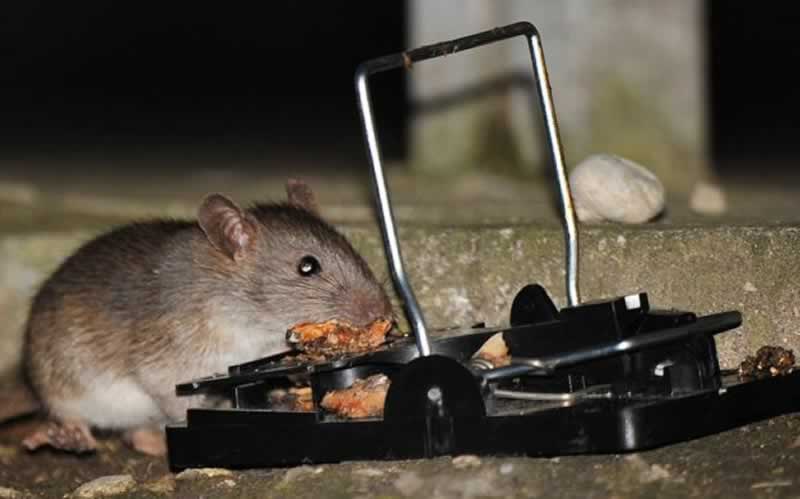 There is also another trick of how to catch and kill a smart rat. The answer is by hiding the traps in a safe place. You just need to set up a feeding area that is safe looking by putting the inside of an empty cardboard box an unarmed trap. Then, use sawdust to cover it. After that, inside that box, you can leave a trail of the rats’ food and don’t forget on the top of it too with a piece of food as a trigger. When the rat feels the box safe for them to take the food, take all the food away, and leave only the single piece of food to lure them and you are ready to set the trap.

Don’t Provide the Source of Water and Food

Rats are an animal that is discriminating. When they feel like they have found the source of water and food, they won’t find another food especially if they are not familiar with it. When the water or the food is removed from the area, they will get over their fear fast towards new things. That’s why it is important to eliminate the food source for the rats, and the only option for them is to eat the food on the trap. It applies to the water source too. Open source water will not attract mice, but rats. They like water in the sink, a stream, and even water dripping from the pipe.

If the rats in the house are way older and smarter than you think, it usually takes several days or even a week to successfully catch it. What you need to do is just to stick with the correct method you are doing and be patient. Don’t switch the bait. Just wait and see. Some people usually make the common mistakes of how to catch a smart rat by changing the bait, using poison, or arming new traps too soon. All of them will only make the rats scared instead of killing them.