How Hydraulic Cylinders Work and Where they are Used

Hydraulic cylinders are used in a number of applications, mainly where strong push and pull mechanics are a part of the operation. This technology was actually developed in the 18th century but it gained a foothold during the industrial revolution as the number of factories and production pushed industries to success. Today, they have expanded into a lot of different industries including construction, mining, and manufacturing. 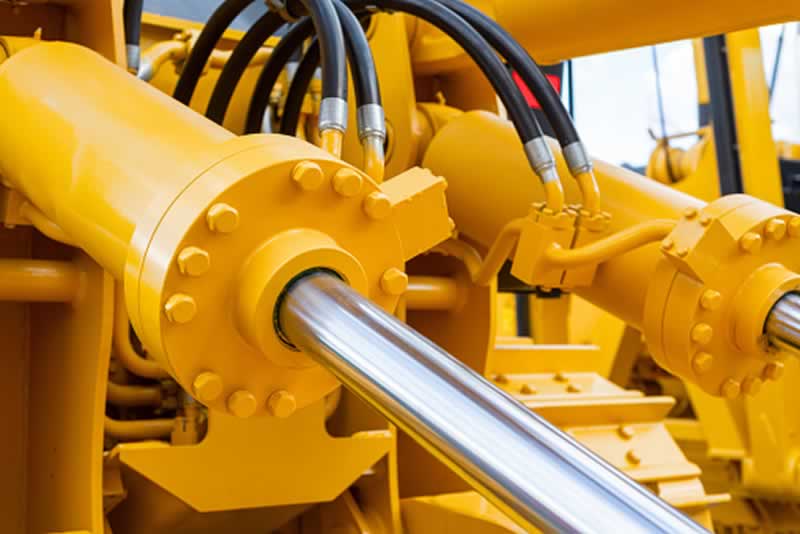 We’re going to dive deep into the science behind the operation of hydraulic cylinders to see how they work and what industries use them.

Hydraulic cylinders get power from the pressure of fluid, most notably hydraulic fluid. It’s based on Pascal’s principle that pressure is equal to force divided by area. Pressure is applied to a piston, which produces an increase in pressure on the next piston. So if the area is five times the initial area, then the force applied to the second piston will be 5 times greater. This effect is created by a hydraulic press. Pascal was the man who discovered that pressure at a specific point in fluid is equal in all directions when it’s at rest. Furthermore, that pressure is identical across all planes, as long as they pass through the same point. Of course, that’s the scientific explanation. In simpler terms, pressure is applied to a small piston which then creates pressure within the fluid. That pressure is then transferred to the next piston. This entire process creates a chain reaction throughout the length of the machine.

What are the Common Uses of Hydraulic Cylinders?

Hydraulic cylinders are found in a lot of machines where lifting, pushing, or pulling is required. Hydraulic devices are commonly found in heavy machinery where movement must be controlled. This includes large cranes, packing machines, lifts, drills, and dump trucks. In short, hydraulic cylinders provide large machines with agility that wouldn’t be possible otherwise. Just think of any large machine where users are able to control movement and there are probably hydraulic devices being used to control it.

One of the most common applications is a garbage truck. Think about how these vehicles are able to lift large garbage cans and compress garbage. Hydraulic cylinders are what make this possible. Here are some other industries where you can expect to find hydraulic devices:

These devices operate under a simple concept that is used to achieve what would otherwise be impossible.

Can be Used at High Speeds

The science behind hydraulic cylinders makes its speed unaffected by size or weight. When using electric devices for the same tasks, the weight absolutely affects speed so there are cases where hydraulics make much better sense.

Hydraulic devices are much more accurate than other forms of the same device. They can hit targets within a very narrow range thanks to the way oil and valves interact.

Even small hydraulic cylinders can produce a lot of force, making them highly efficient. There won’t be a need to concern yourself with support for larger actuators.

Hydraulic cylinders are energy efficient when compared to electric counterparts. In fact, they require very little power to operate due to their concept. This conserves energy on a large scale. They also require fewer moving parts, adding to their efficiency.

Hydraulic cylinders are also quite durable and can withstand harsh weather. They still provide plenty of force even in adverse conditions.

The science behind design and force allows hydraulics to undertake extraordinarily large tasks that other comparable devices cannot. This force can even be extended over large distances.

Hydraulic Devices Must be Used Cautiously

There are certain risks that come with the use of hydraulic cylinders. Lines are under extraordinary pressure so if they burst, there’s a chance of severe injury. Precautions must be taken to ensure this doesn’t happen. Furthermore, hydraulic oil is flammable so leaks can lead to fires and other risks.