What To Know Before Buying Cast Iron Radiators

There is no denying that cast iron radiators look fantastic, regardless of what room you install one in. Like trying to buy any type of radiator i.e electric radiators, it helps to know what the benefits and limitations of a specific style are the help make an informed decision. If you’ve been thinking about taking a chance and replacing old radiators with something a bit more sophisticated (i.e. cast iron radiators), what should you know before you buy? 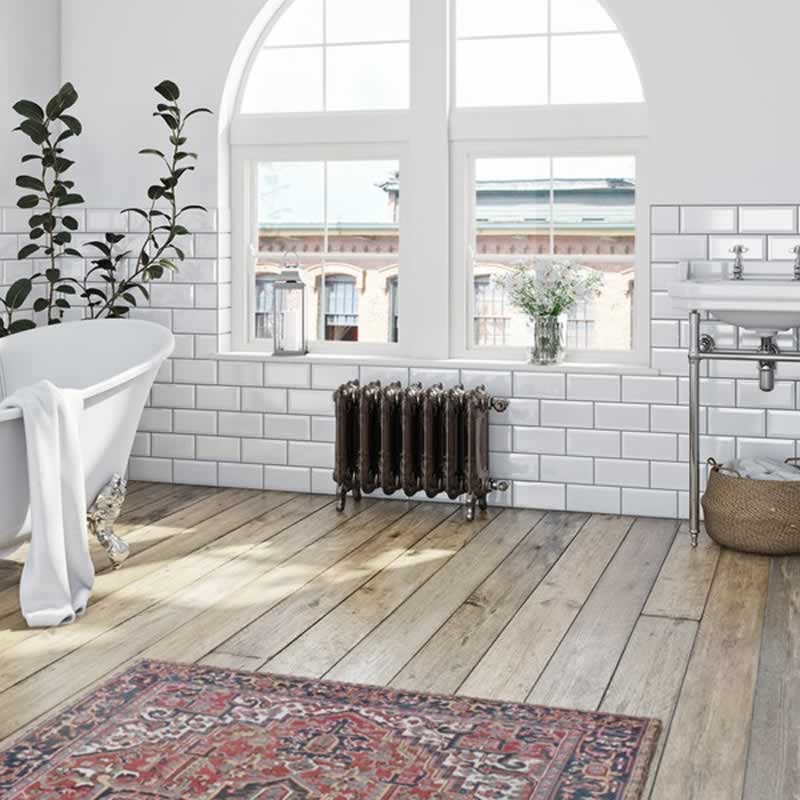 Let’s take a look at some of the key points to address when shopping online for cast iron radiators, and what you should know if this is your first time buying this type of radiator. I specifically want to look at some of the common misconceptions surrounding cost and maintenance, so let’s start by looking at why some people think they are more expensive to use.

Cast Iron radiators are not expensive to run

While cast iron radiators are traditional and have an antique design, if you were to crack one open and look inside (which you should never do by the way) you will find that the internal pipework is exactly the same as what you would expect in a modern radiator. So while it has an old school style, it does not heat a room in such a manner. You shouldn’t expect to pay much more running a cast iron radiator compared to other designs which provide the same level of heat output.

It is slightly odd that we categorise cast iron in its own way when we don’t typically do the same with other radiator materials like stainless steel and aluminium. You may argue that it would be best to present cast iron radiators as column radiators which just so happen to be made from said material. Why is this important? Well, a cast iron radiator’s shape and design allow it to cover a wider surface area, meaning it will draw in a higher volume of cold air in a room to heat it up. I would recommend always going for radiators which cover a wider area. Even If you weren’t shopping for a cast iron radiator, a radiator with double panels or a fin section in the middle will see you create a larger surface area without having to pick a larger radiator.

They do require upkeep (if polished)

With the design of the radiator, the most striking feature when choosing cast iron, is that most cast iron radiators will forgo being painted and instead be polished. The idea is that you want to show off just how intricate the detail of the design is. This doesn’t mean the radiator is bulletproof. You can still get scuffs and marks from time to time, so it helps to maintain the polish every few months. You don’t need any special cleaning products; the likes of WD40 and linseed oil will do the job if you notice any marks. Polishing also helps prevent any oxidisation on the radiator and helps prolong lifespan.

Base Coats are your friend

When cast iron isn’t polished, a radiator will come with a base coat to provide adequate protection. If you’re the kind of person who doesn’t like the idea of polishing your radiators periodically, stick to base coats. Just know that if (and when) you get marks or scuffs on the radiator, you’ll have to treat it like a standard radiator.

I know it sounds like a stupid point to make, but people often forget that cast iron is a much heavier material than other radiators. When choosing where to put it, keep in mind you won’t be able to move it around much, or place it in high traffic areas. You’ll also want to make sure it is hung on walls which can take the weight.

Making cast iron radiators takes a good bit of time, and part of their desirability is the fact that they’ll last longer. You’re paying that little bit more to get a product which, on average, lasts for at least ten years. If you see your radiators as an investment and not something you think will only last five years before causing problems, cast iron is the way to go.

Don’t forget that if you’re planning on doing some DIY work at home to read the latest general DIY tips we have on the blog, with professional advice on how to do anything from fixing roof damage to painting on your own.